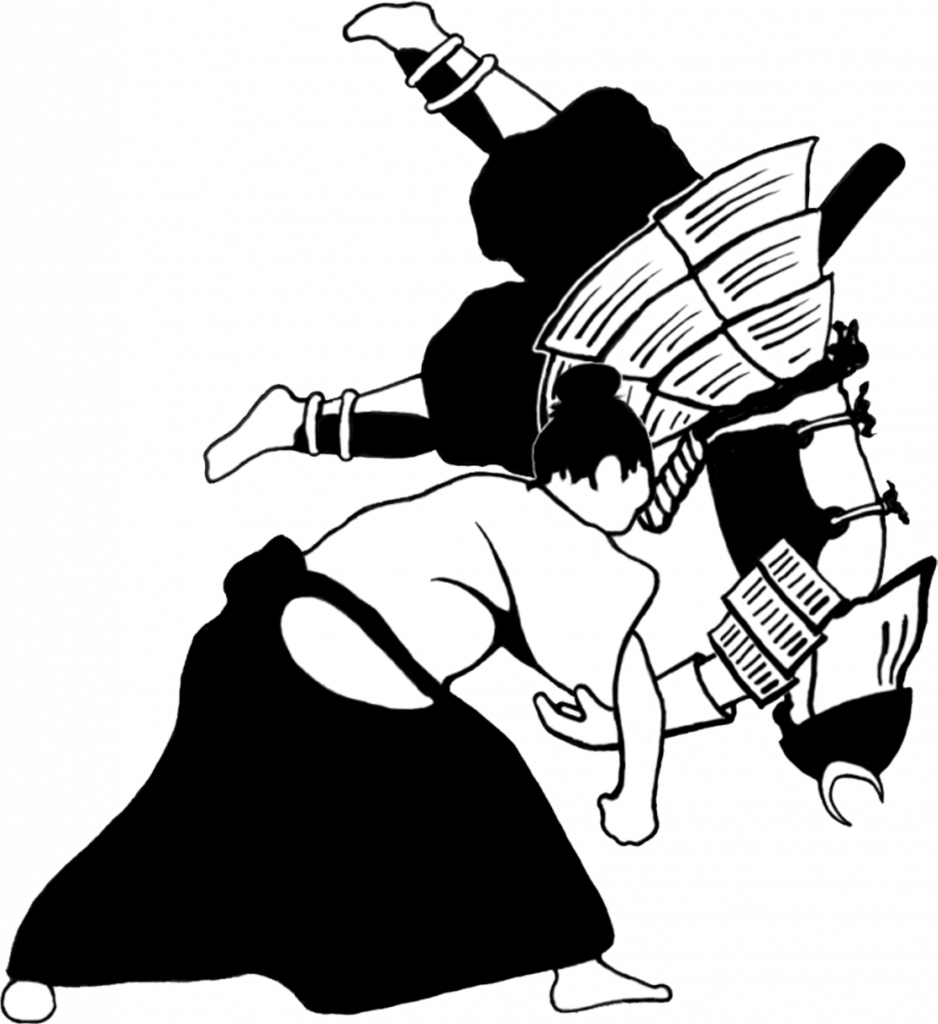 Aikido is a young martial art developed by Morihei Ueshiba. It is mainly about dissipating the opponent's energy and thus surviving the attack unharmed. In contrast to other martial arts, which are largely destructive, the pacifist purpose of aikido is to put the opponent in a situation that convinces him of the futility of his attack. However, pacifistic does not mean that the opponent will feel at ease. Rather, aikido techniques allow the tori to choose whether and how much damage is done to the attacker. 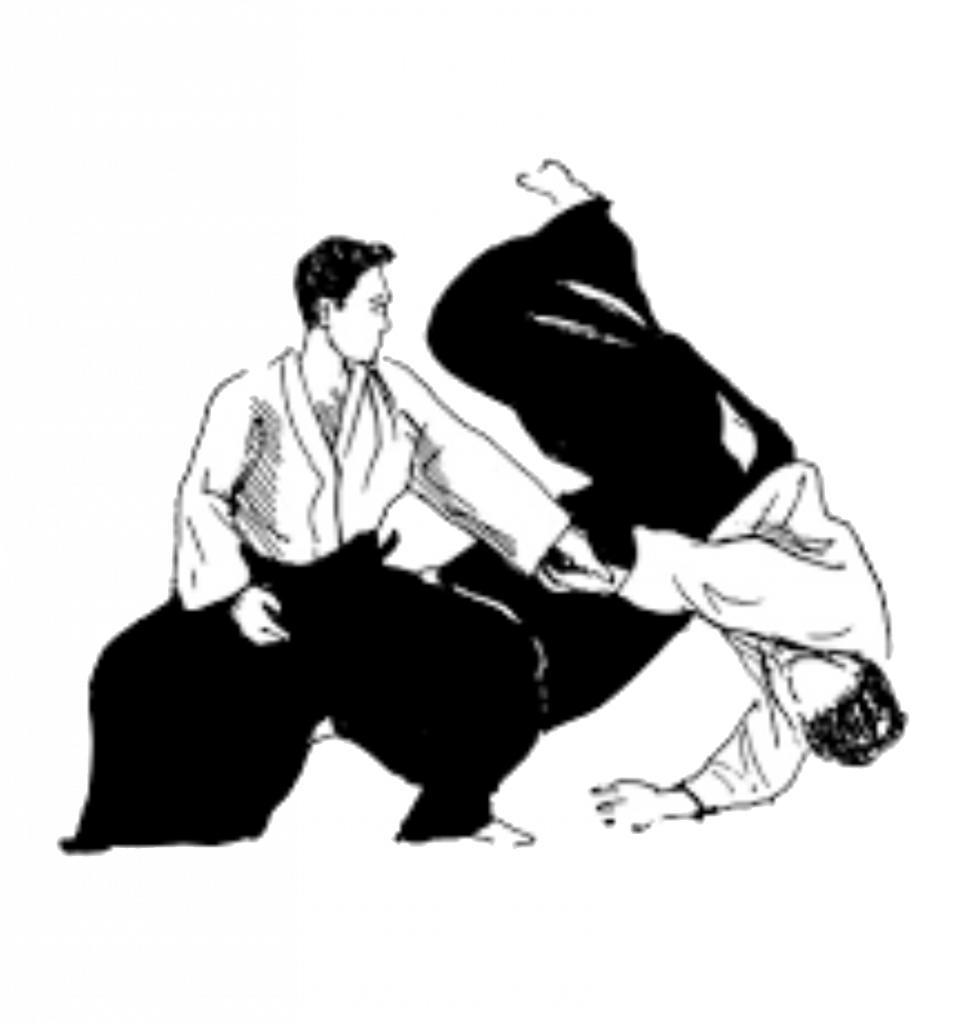 Iaido - the way of drawing the sword. This budo discipline originates from the sword art of the samurai. A special feature of the art is that the sword is used directly as a weapon during drawing. 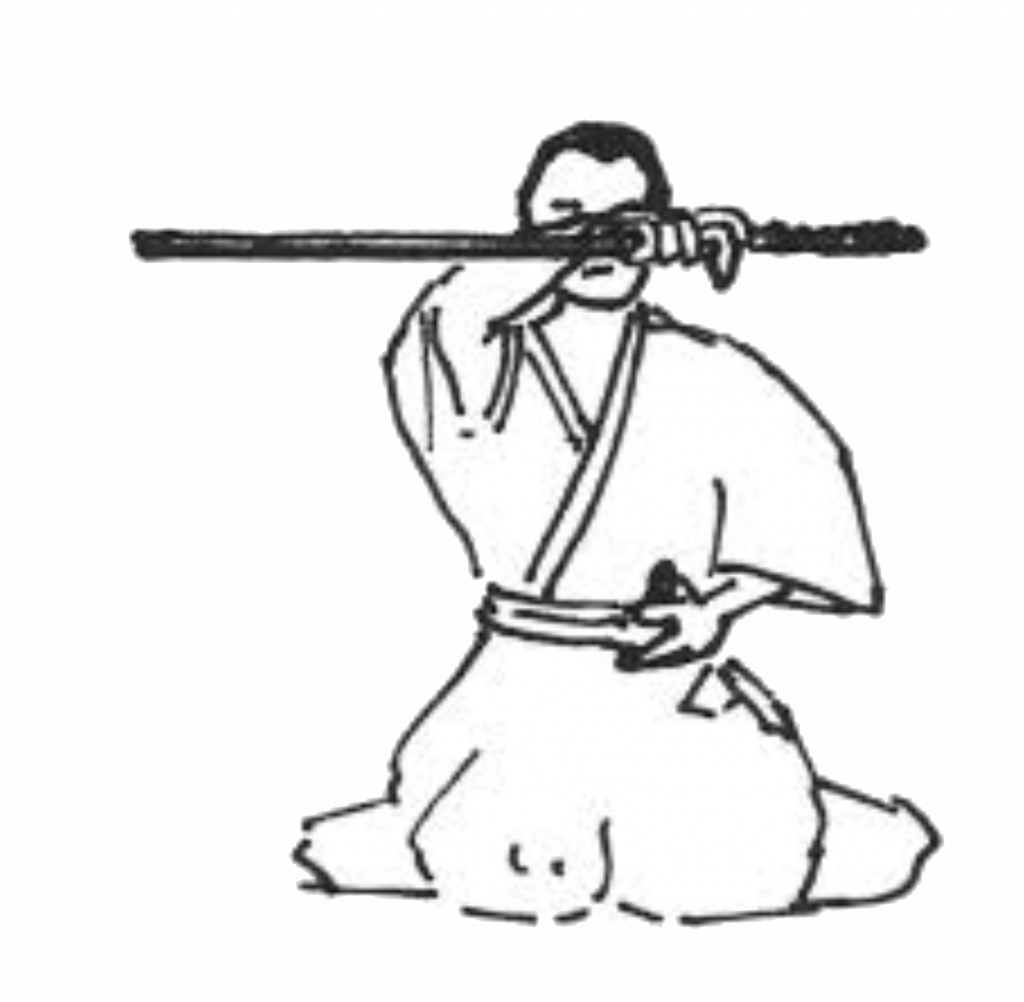 Judo Judo – the gentle way – is a Japanese martial art founded by Jigorō Kanō. Jigorō Kanō created Judo as a martial art from the styles of various Jiu-Jitsu schools. He mainly used throwing techniques (Nage Waza), ground techniques (Ne Waza), punching and kicking techniques (Atemi Waza). Jigorō Kanō placed great emphasis on Randori, the practice fight. In more recent times, techniques with a high risk of injury have been increasingly removed from Judo. Judo is now practised almost exclusively as a competitive sport. Punches, kicks, the levering of small joints and many other holds are forbidden in Judo competitions and are hardly ever taught any more due to Judo's transformation into a martial art. 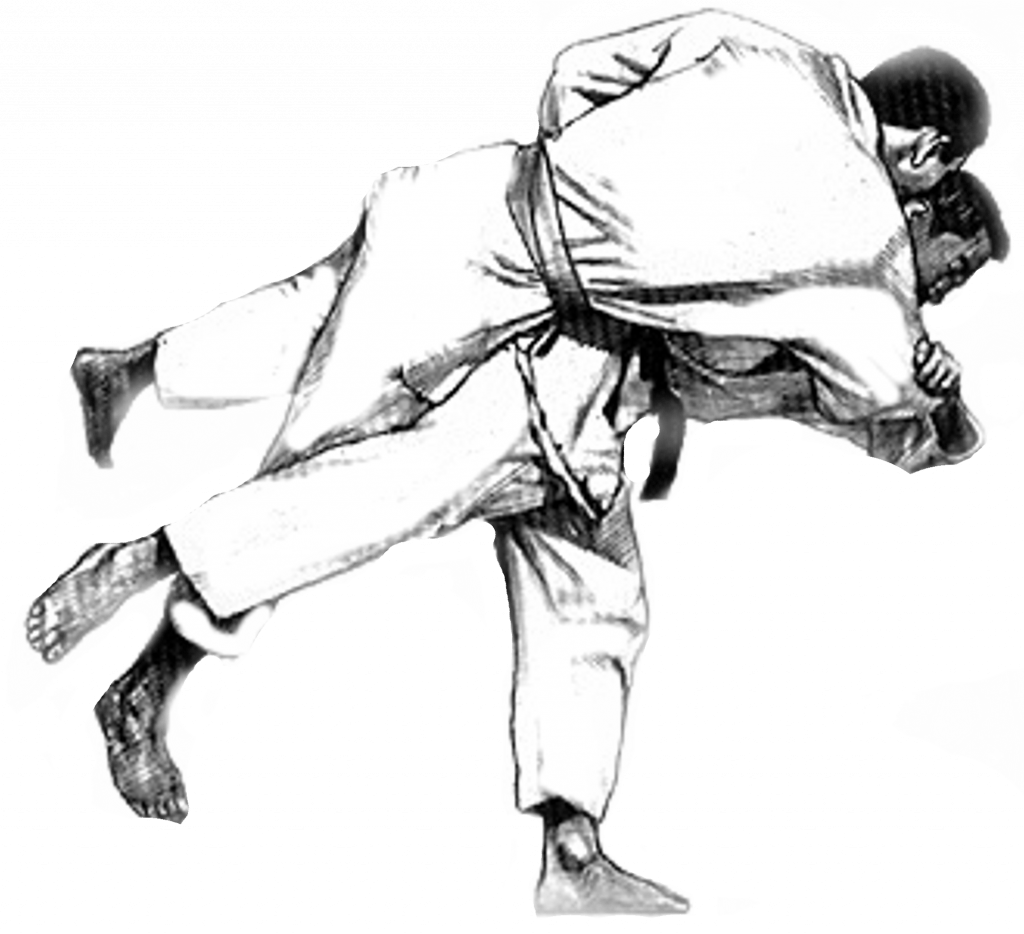 Karate - the empty hand - is a martial art whose origins probably lie in 19th century Okinawa. The main focus is on using kicks and punches to win the fight.

In addition, there are some levers and throws. In advanced training, chokeholds and atemi techniques (attacking vital points) are also taught.

The Goju style is composed of Go (hard, strong) and Ju (soft, supple). The two elements are firmly connected and give the Goju Kai Karate with its round and flowing movements the harmony that makes this style so unique. Posture training, strengthening of respiratory organs, promotion of concentration and body awareness are other very important areas that are promoting in Goju Kai Karate. »Body and mind are connected. Through proper breathing and mental concentration, we are able to understand the essence of martial arts." 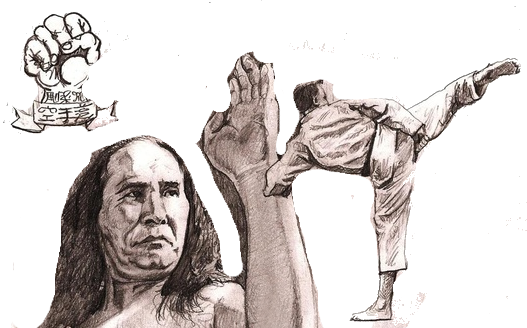 The style offered here is one of the oldest Japanese sword fighting arts ever. It was founded in the early as 15th century and has survived the last centuries almost unchanged with its kata (fixed training forms.

It begins with training with the wooden sword in individual and partner exercises: Kenjutsu is not a competitive sport. The forms of movement practiced here with the Katana (sword) and the Bokken (wooden sword) train concentration, coordination and motor skills and considerably increase one's own body awareness.

Kenjutsu can be practised by men and women up to a ripe old age, and no special prerequisites are needed other than the interest and leisure to learn an ancient Budo art. 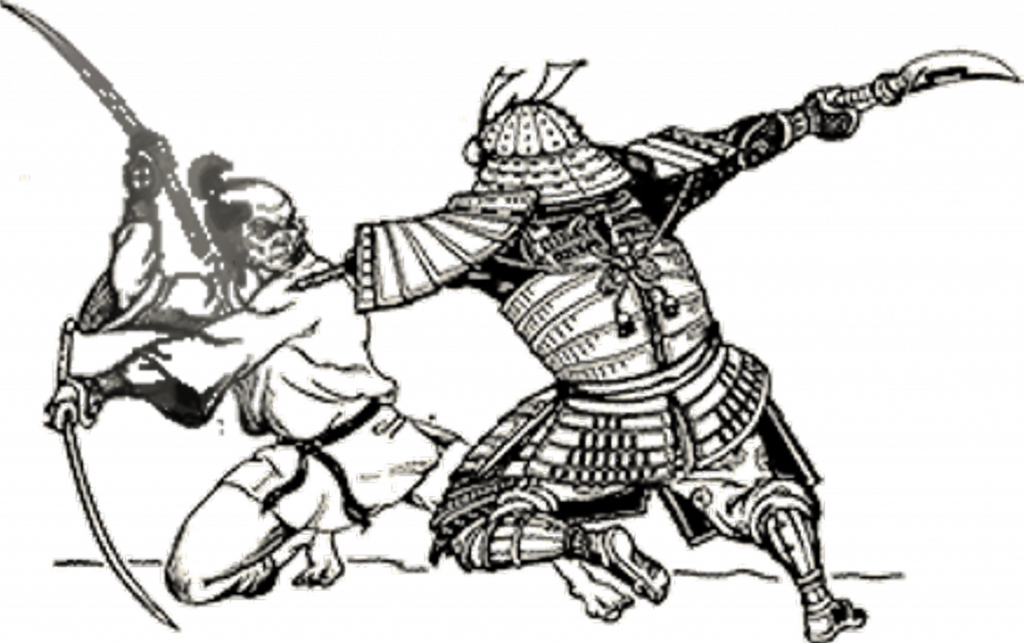 Kickboxing is a martial art that originated in the 1970s from a mixture of boxing fist techniques and karate foot techniques. Kickboxing is fought in the ring, the goal is a knockout or a point victory. 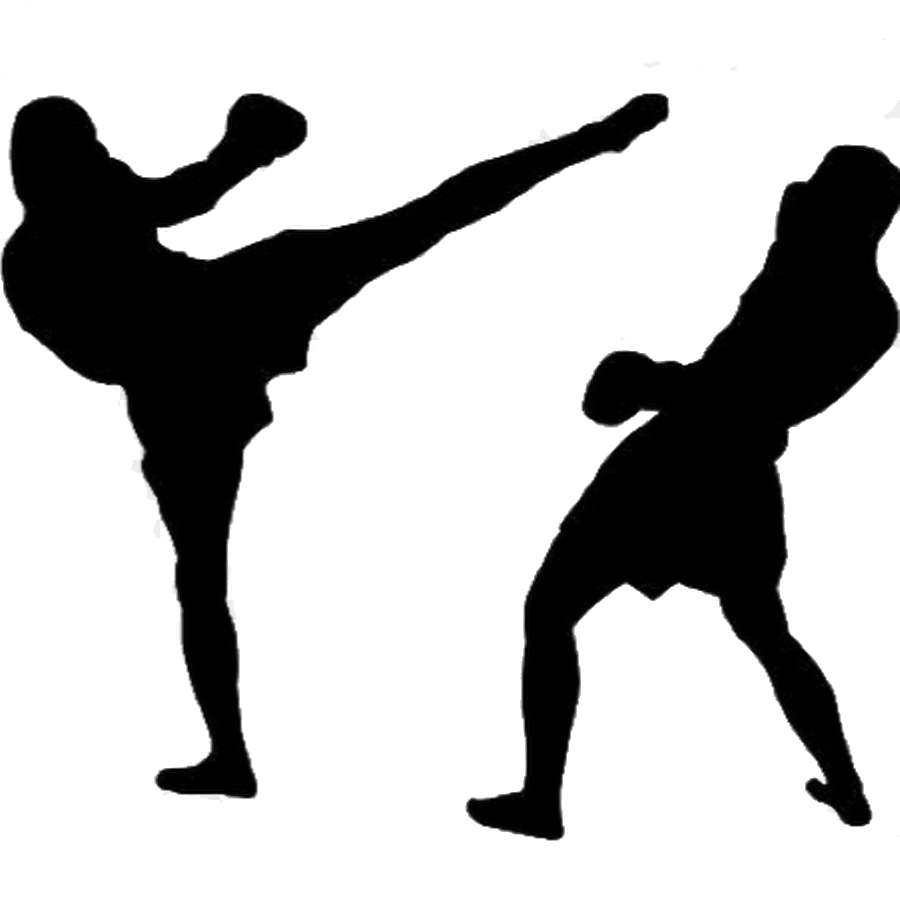 Kyûjutsu is the ancient art of Japanese archery. Hitting a target, under all conceivable circumstances, is the central aim of Kyûjutsu. The use of the longbow for self-defence at close range is also taught.

Kobudo (the weapons of the peasants)

In earlier times, no "empty hand" system could survive without the additional use of weapons (Bukihō). The samurai used warrior weapons in bujutsu, the people converted everyday utensils into weapons and thus founded the systems of kobujutsu

Until the sporting of the systems in Japan and the modification of bujutsu in the Budō, a separation of the two was inconceivable. Neither in the Japanese fighting systems nor in the Okinawan fighting systems could one do without the additional use of weapons. Even today, they are necessary aids in self-defence and are automatically integrated into unarmed training.

Kobujutsu is a special weapon method (Bukihō) that teaches the use of folk weapons in Japan as well as on Okinawa. Later, the modern term "Kobudō" was derived from it, which was intended to transform the martial methods of Kobujutsu into peaceful methods of practice.

Kobujutsu 古武術 - "Old Bujutsu" (古武術) is the name for the popular weapon systems of the lower-ranking population from Japan (Kobujutsu (Japan)) and Okinawa (Kobujutsu (Okinawa)). Kobujutsu is a vague distinction from the Japanese art of war (bujutsu) of the professional warriors (bushi). The weapons (buki) and systems (ryū) of kobujutsu were developed both in Japan and on Okinawa mostly from the everyday tools of the people. In the Okinawan art of war, kobujutsu was always closely linked. Each unarmed system was complemented by various weapon systems.

Kobudō 古武道 - "Old Budō", is a follow-up concept to kobujutsu and is analogous to the change of bujutsu to budō. Here, the syllable jjutsu (technique) was replaced by dō, which is meant to indicate that it is a way art. The idea is good, the implementation is not. Through the sportingisation of the systems, the Kobudō kata became a virtuoso demo show and lost its meaning as a repository of encoded meaning. 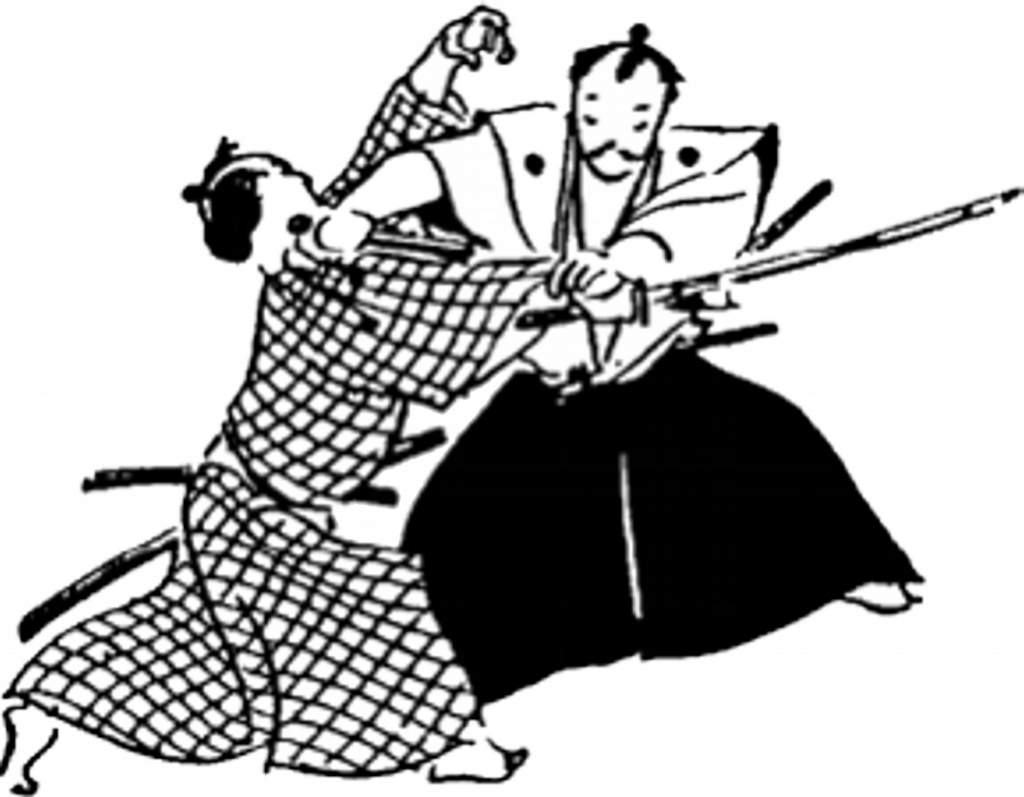 What is Systema (Bojewoje) Sambo?

The close combat system Bojewoje Sambo, represented by Anton Weinberger 10th DAN, the only official instructor who teaches this form of Sambo in Germany on a club basis, knows like Jiu Jitsu only one very direct goal:

Every means is used to achieve this. Thus, like Jiu Jitsu, Bojevoje Sambo was never intended as a sporting competition. Accordingly, it was only taught to very special groups of people from the police and military. Similarly, Jiu Jitsu was only allowed to be used by samurais, the Japanese knights or members of the warrior caste. The similarity between these two systems is easy to deduce. During the development of hand-to-hand combat during the Second World War and during the further development from 1968 to 1970, the Far Eastern fighting systems were the main models, in addition to the traditional Russian fighting styles. The most effective techniques were systematically adopted from each type of combat. As a means of war and close combat, Jiu Jitsu was virtually predestined as a model. The result was the dangerous close combat Bojevoje Sambo, based on wrestling.

The civilian self-defence derived from it is identical in movement structure and basic principle, but is distinguished by the absence of the extremely dangerous techniques. These are usually replaced by harmless means.

These techniques are only taught to Master Grades. They absolutely require the mental maturity to be able to deal with them consciously, as they can lead to serious, sometimes fatal injuries. In concrete terms, this means that in training one must use one's strength so carefully that the partner is not harmed. In serious situations, the principle of proportionality of means must be taken into account. This means that the defence must be adapted to the severity of the initiated attack. This means that one must not get into a hectic rush and injure someone hastily, possibly even fatally.

There are three types of sambo:

Historical comparison of the Russian and Japanese fighting systems

Here it can be stated that there is no common origin. There is only evidence of a Japanese influence at the beginning of this century in the Russian systems.

The following were used:

The external similarity of Jiu Jitsu and Borya Sambo results inevitably from their use as a weaponless means of close combat. The "human" system has only a certain number of body weapons (fist, knee, elbow...) at its disposal, which it can use in a targeted manner against weak points on the human body (of the opponent).